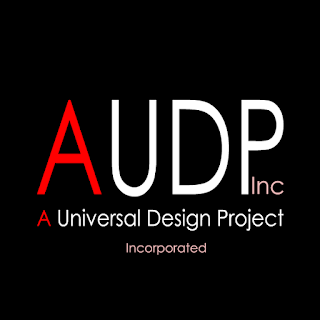 On May 31st 2017, A Universal Design Project, Inc was established as a For Profit Benefit Corporation in the State of Florida.

The purpose for which the corporation is organized is to create a general public benefit:

A Universal Design Project, Inc., is a social development corporation established for the general business purposes of creating social events, opportunities and built environments centered around active living, promoting the use of universal design and benefiting the broadest population of users.

The general and/or specific public benefit(s) to be created by the corporation (in addition to its general purpose) is/are as follows (optional):

A Universal Design Project, Inc., is established for the general public benefit of promoting inclusion and diversity through the principles and practice of universal design in an effort to build a culture of health, wellness and social participation.

Our goal is effecting a positive national pattern of growth and development through social opportunities and built environments that allow people, interaction and independence through active living.

All business activity conducted under corporation will strive to make it easier for people to lead happier and more productive lives by minimizing time spent navigating invisible and physical barriers to participate in activities of life.

Cumulative goal of creating more socially balanced, livable and sustainable communities in an effort to reduce healthcare spending, transportation costs and increase surplus funds for individuals, governments and the nation in general.


For those that don't know, Benefit Corporations are corporate structures for social enterprises that allow them to be for profit as long as their primary reason for existing is general public benefit and maximizing profits remains secondary.   I believe in this as a socially responsible and sustainable business model.  As of today, 33 States have adopted Benefit Corporations legislation, 6 more are working on it but Missouri is not one of them.  I am hoping to help change that for other socially conscious Missouri entrepreneurs through this project.

A women owned corporation, A Universal Design Project, Inc, is the parent of a social enterprise of projects originated by Atypical, LLC which dbas Helping Kids Together, A Film Series and 309 elm.

As a mom who built these projects because of life with her daughter, all of them ultimately focus on helping kids develop social capital and lead fulfilling lives.

A Universal Design Project was established to lead a shift in construction and rehab to a more universal standard in order to meet the diverse needs of the general population.

Based in St. Louis, MO, our focus is guidance on development and reconstruction of real property to appeal to a multi-demographic. In addition to new construction advising, we work to help re-purpose outdated houses and buildings as a means to minimize the environmental impact of construction while adding value to, and extending the useful life of otherwise functionally obsolete properties.
Advising and educating about UD as a crucial element of the planning process helps maximize the value of the project's functional life and minimize costs spent on expensive retrofits brought on by poor planning.

Universal Design is the key to a more economically and efficiently run society. This statement is backed up my observations working in real estate since 2003 and motivated by my life as a parent raising my daughter Mia who was born with a spinal cord injury and relies on a walker, wheelchair and canes to navigate life. On a daily basis, my work in real estate shows me the lack and my life with my daughter illustrates the need. I live this, so my objective with this project is sharing the knowledge gained in both roles and through my studies of universal design with a goal of making life easier for people to live fully functioning lives that allow them to thrive and not just exist, in their homes and beyond.
It remains my hope these efforts will inspire others to work toward the same. It's a big world out there and we have got to work together on this enormous task to make it a truly universal success story.

What is Universal Design?

"Universal Design is a process that enables and empowers a diverse population by improving human performance, health, wellness and social participation."

Universal Design, also knows as Inclusive Design or Design for All, is more than an industry buzz term or the latest fad in residential design and construction. It is smart design.
In layman's terms, it's style meeting accessibility. At it's core, it's a baseline of human centered design principles to be followed with thoughtfulness and creativity during the planning process before a project's construction phase begins.
Applied universal design allows efficient and effective use of time, energy and resources. It is a concept that applies to the built environment as well as products and services that accommodate a global user without stigmatizing.

Why do you need a universal design consultant?

Because constructing or reconstructing environments in this day and age and not applying UD principles is employing outdated practice and can lead to large future expenses that may hit when you least expect them.

By having a universal design consultant as part of your next building, home improvement or modification project, you will not just maximize the usability of your space, you will ensure added value and future marketability of your home or project.

Do it right the first time.