What does universal design look like in your neighborhood? Here is a look in progress... 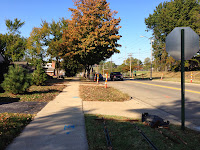 As a practicing Realtor, it is no secret that a big motivator for people shopping for residential living space, is whether or not things are within easy reach, and not necessarily by car.  That is why building--or rebuilding--homes and communities where people can walk or roll to where they need to go, is so important.  Especially in this day and age when there is much buzz about obesity, active living and ozone levels. 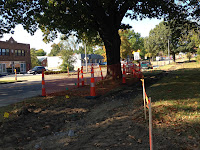 Richmond Heights, a suburb in the east central section of St. Louis County, Missouri knows how important it is.  In fact, they have been working to get their township on the road to healthier living for many years now and finally broke ground this past week on their streetscaping initiative : The Dale Avenue Great Streets Project. A project that is not just recognizing alternative modes of transportation but encouraging them by it's very being. There are bike lanes, bulb outs, curb cuts and crosswalks that are there for safety as much as they are to provide access.

Positioned as a main traffic artery and alternative route between city and county, Dale Avenue and all its improvements provide the mixed use corridor that solidifies the viability of this project as an added asset of the community.  This is a prime example of a "Build it and they will use it because there are plenty of places to go" thought process.  This forward thinking community started assembling this staged production back in 2007 using a grass roots approach beginning with public open houses, land studies, and neighborhood workshops, giving citizens and stakeholders that would ultimately benefit from this type of improvement, a chance to contribute directly and be involved at the ground level. End users were asked, they gave, and now their ideas are being implemented on previously under-utilized easement. What more can taxpayers ask for?  Community involvement pays off. 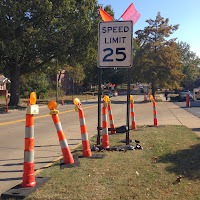 How does this relate to universal design? This is universal design. It is an example of designing for health, wellness and social participation, some of the goals of UD.  It is seamless incorporation of elements that wil benefit all and it is being done as a team working together to see it come to fruition. 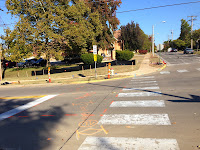 These kinds of civic improvements have a positive and ongoing socio-economic impact.  They make active transportation more accessible for all residents and this cultivates community growth by promoting social activity within neighborhoods.  It reduces transportation costs by providing safe access to alternative transportation routes, which ultimately leads to improved health and well being, reducing healthcare costs for individuals and reducing the burden on the healthcare system at large.  Not to mention it leaves people money for other things, like supporting local business. It keeps people in the community longer by making it easy for them to get around to the amenities the community has to offer. 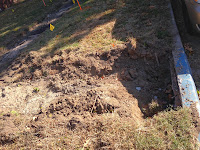 This morning while out on my field study taking photos for this blog post, I met with some less than favorable opinions about this development activity.  One property owner thought it was an unnecessary use of tax dollars on top of an unsightly mess for property owners.  My only comments to this--and granted I am not the one dealing with a direct disruption--is that minor setbacks lead to major improvements so hopefully those that are being inconvenienced will realize the long term benefits community wide improvements like this have on private property values.  It is a win-win.  This is most definitely not a waste of taxpayer money at all.  It is wise appropriation of funds that are available from the government for this sort of community wide improvement activity.   It would be waste of resources not to take advantage of it, especially when there is a demonstrated need. 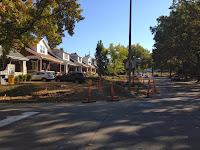 Curb appeal sells and the value-view stretches far beyond where easement and sidewalk take over.  If you are a property owner trying to sell  your home during the seemingly unsightly production stage of this project, look for the beauty in what the finished product means for the marketability of your property.  It is a selling point! You most definitely are not going to be lying when you say you live on a "great street"...just make sure it is in the marketing remarks because that is music to a buyer's ears.

I captured an odd assortment of pics from today and am calling this haphazard gallery of photos: "Looking Beyond The Obvious".  There is much beauty to behold about these photos because this is a perfect demonstration of progress as promised.

As a frequent traveler along Dale Avenue I look forward to watching this progressive action as it happens.  And I will definitely keep you posted!

In the meantime...Go Cards!!.  They just won Game Three of The World Series and that last run was a real nail biter! Woo hoo!!!! 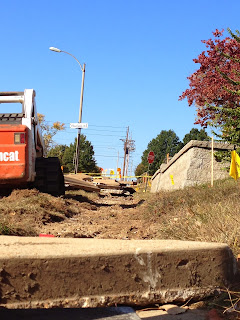 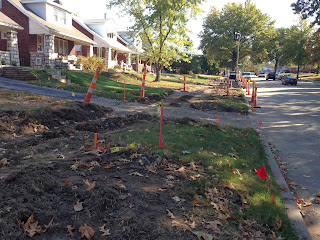 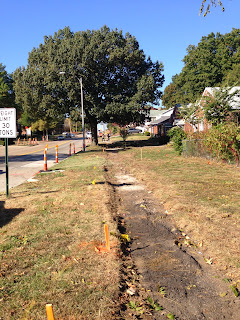 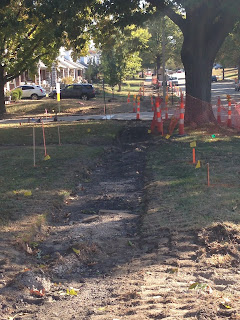 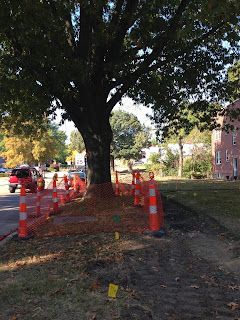 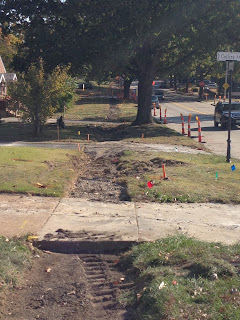 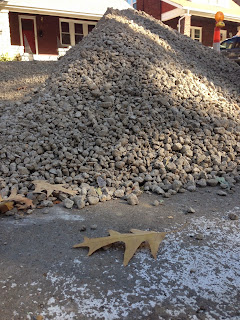 A Universal Design Project was established to lead a shift in construction and rehab to a more universal standard in order to meet the diverse needs of the general population.

Based in St. Louis, MO, our focus is guidance on development and reconstruction of real property to appeal to a multi-demographic. In addition to new construction advising, we work to help re-purpose outdated houses and buildings as a means to minimize the environmental impact of construction while adding value to, and extending the useful life of otherwise functionally obsolete properties.
Advising and educating about UD as a crucial element of the planning process helps maximize the value of the project's functional life and minimize costs spent on expensive retrofits brought on by poor planning.

Universal Design is the key to a more economically and efficiently run society. This statement is backed up my observations as a working Realtor® for fourteen years and motivated by my life as parent and caregiver to my daughter Mia who was born with a spinal cord injury and relies on a walker, wheelchair and canes to navigate her life. On a daily basis, my work in real estate shows me the lack and my life with my daughter illustrates the need. I live this, so my objective with this project is sharing the knowledge gained in both roles and through my studies of universal design with a goal of making life easier for people to live fully functioning lives that allow them to thrive and not just exist, in their homes and beyond.
It remains my hope these efforts will inspire others to work toward the same. It's a big world out there and we have got to work together on this enormous task to make it a truly universal success story.

And supported in my efforts by:

What is Universal Design?

"Universal Design is a process that enables and empowers a diverse population by improving human performance, health, wellness and social participation."

Universal Design, also knows as Inclusive Design or Design for All, is more than an industry buzz term or the latest fad in residential design and construction. It is smart design.
In layman's terms, it's style meeting accessibility. At it's core, it's a baseline of human centered design principles to be followed with thoughtfulness and creativity during the planning process before a project's construction phase begins.
Applied universal design allows efficient and effective use of time, energy and resources. It is a concept that applies to the built environment as well as products and services that accommodate a global user without stigmatizing.

Why do you need a universal design consultant?

Because constructing or reconstructing environments in this day and age and not applying UD principles is employing outdated practice and can lead to large future expenses that may hit when you least expect them.

By having a universal design consultant as part of your next building, home improvement or modification project, you will not just maximize the usability of your space, you will ensure added value and future marketability of your home or project.

Do it right the first time.

A Universal Design Project evolved from our project Helping Kids Together